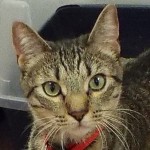 Hi… my name is Brad,

My sister and I were unexpected additions to our people’s home when they adopted our mom, and since they already had two cats and two dogs, they just couldn’t manage to keep us all. Because I’d already been living with other animals for a while, another big family adopted me thinking I’d fit right in, but their clan was so big and so noisy (it takes a pretty phlegmatic cat to really enjoy life with three rowdy dogs and five rambunctious kids!), that it didn’t work out. At just a year old, I still like to play with catnip mice, chase string, and explore the world, so as my mom said, “He’s a good boy, but really needs to be the ‘only child’ in a more peaceful home.” Yours maybe? Let’s talk!