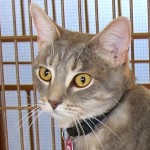 When my mom, who was active duty military, had to move to Maryland for her new posting, pets weren’t allowed at the family’s new housing, so my housemate, Henry, and I lost our home. I lived with them all my life so it might take a while for me to adjust to my new circumstances, but since they say that I love attention and to be held and cuddled, I have high hopes that it won’t be long before someone recognizes my virtues! I’m a delightful, young bobtail grey tabby boy (thus my name I guess!), who is playful, kittenlike, and very gentle and tolerant of kids (I had two in my “former life”!) so I know that I’m going to adapt to my new life in a jiffy. Where better than with you?