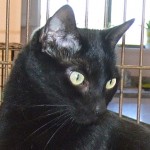 Hi… my name is Josie.

Bio written June 2015:  This is the second time around for me at TALGV, but the first didn’t count as I was only a few weeks old and my mom, a volunteer, took me home to care for and then became a “failed foster” and adopted me! Sadly, she’s developed some heath problems that necessitate moving and she can only have one pet (the darn dog!) in her new home. She said, “Josie is wonderful cat. She uses the litterbox and scratcher, minds ‘no,’ and is good around other cats and small dogs.” She added that I like to drink water from a faucet and am a bit of a “night owl,” but she just ignored my ramblings and let me be. I’m a sleek  solid black lady who’d love to make a new start in life with you.