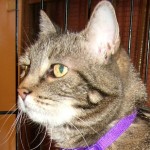 My dad adopted me from TALGV ten years ago when I was five and my life with him (and a young cat) was peachy keen until he decided he wanted to travel. Now there are some cats who’ll say, “Yay — let’s go” (well not too many actually!), but at my age, I guess I wasn’t up to it and wanted to just “be me” in my own familiar surroundings. Dad said that I love being brushed, will let you clip my front claws, and sleep pretty much wherever I want. I do need to trim down a smidge, but that’s only a matter of less food and fewer treats (and maybe some exercise?) — just like humans, so won’t you give this perfectly seasoned lady one more chance?