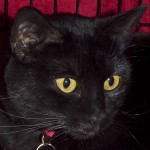 Hi… my name is Mooky,

Well, humans may like those squirmy, noisy things called babies, but this little lady really had her nose out of joint when mine arrived, so I had to say adieu to my family (the big ones were really nice though!). I also lived with three other cats and two dogs, so I’d say that I was pretty adaptable in the “getting-along-with-non-humans” department! My people also said that although I’m sometimes independent, I can easily get attached to one person (you think of dogs as bonding with their people, but we felines do that too once in a while!), so if you’re looking for a quiet lady who will be happy just to be with you reveling in life’s simple pleasures, that would definitely be me!