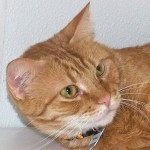 Hi… my name is Adidas,

A very nice elderly lady adopted my brother, Reebok, and me a while back (we were originally part of the “Sneaker litter” at TALGV!), but when her health took a turn for the worse, she was unable to care for both of us at once. She decided to keep Reebok for the nonce (not sure how she made that decision-–kinda hurt the old ego!), so for now, it’s just me looking for love again. I’m a laid back 4-year-old boy who loves window watching (there’s just so much going on out there!) and I love attention (ok, on my terms–but it is pretty often!), so I know I’ll be just the antidote to your “I need some feline company” blues!