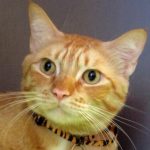 Hi… my name is Reebok.

A wonderful man adopted my brother, Adidas, and me a while back, but when he developed respiratory COPD, he realized that, much as he adored us, we just added to his breathing problems. We were originally part of the “Sneaker” litter of kittens, have been together all our lives, and loved playing together. A foster mom we had for a while said, “Reebok is the hunter, the talker, and the in-your-face guy. They’re loving with their people (but not other pets). They relish watching birds and lizards through a screen door, and love a handful of treats at bedtime. If you appreciate interaction with your cats, “the Sneakers” are for you!” Since Adidas has gone to a new home now, it’s too late to adopt both of us, but come to meet me soon so I can have a forever home with you.