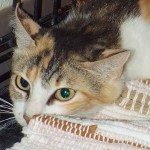 Hi… my name is Cydney,

So far, 2016 hasn’t been the best of years for me or my housemates, Chad, Carley, and Chase. After our dad died, I guess someone thought they were doing a good thing by leaving us outside and feeding us, but after a few months, we became more and more guarded, as there were so many threatening things out there and we had to learn to survive. Once upon a time though, we were very sweet cats, and as the volunteers are discovering, we’re become more trusting each day. It may take a while for us to adapt to new homes, but we will, we promise, if you’ll just give us a chance, and make the rest of 2016 one in which we can resume our old friendly ways.