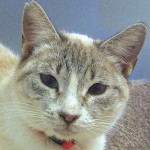 When the shelter that I was living in closed, no one was quite sure what was going to happen to all my feline and canine friends, so we were overjoyed when we found out that TALGV would try to make room for us as a few (very precious) spaces opened up. Well we all survived the trip, and are getting settled into our new digs (and a few of us have been adopted already!), so I’m crossing my paws that I’ll be next. I’m a tiny silvery gold and white Siamese mix with awesome blue eyes that will look into your soul. Since I’m still a youngster at only a year old, I know that the many years ahead will be happier for both of us when they’re spent together!