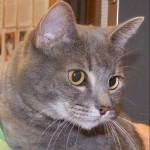 Hi… my name is Leah.

I may hold the dubious record for cats “returned most times to TALGV” through no fault of my own! I arrived as a stray for the first time back in 2010. I was adopted shortly thereafter, but my mom died a year later. I was adopted again, but that person had “too many outside interests,” and I came back one more time. Then, three years ago I was adopted by a couple that is now moving to a place that doesn’t allow pets! All my families have said that I’m a loving, playful, gentle lady (albeit a bit shy at times), and since I’m a beautiful combination of dilute tortoiseshell and grey tabby, I have high hopes that this year will see me in my really, truly, honest-to-goodness finally “forever” home!