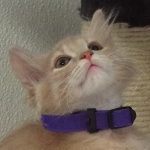 Hi… my name is Loafer,

LOAFER is the “runt” of the litter and also the most hilarious kitten ever. He kinda looks like he was struck by lightning with his wild fur going every direction. He is a soft buff orange with a little pink nose, and a total charmer. He thinks he is much bigger than he is, and realizes it every time he tries to jump on a chair or couch. When Loafer plays he bounces around like a bunny, punctuating each hop with a little squeak. You probably can’t handle the cuteness.