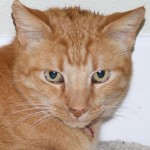 Hi… My name is Nick.

Hey guys! I’ve been at TALGV for almost three years now and I’m beginning to get a complex! I’m a very, very friendly 6-year-old marmalade boy who was found in a Green Valley family’s back yard. They tried putting me out over the fence, but I came back (twice!) despite the dog and just waited outside their door (I should have been called “Fearless Freddie”!). Although they called around the neighborhood, they had no luck finding my home, so my persistence paid off – I was rescued! Everyone says that I’m a delightfully friendly guy who just seems to get overlooked for some reason, but that I’ll find a home “one of these days.” Well I sure hope it’s soon ‘cause I’ve got a ton of love to give!