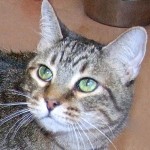 When you’ve lived with twelve other cats and three dogs, you’ve got to be considered a pretty flexible feline! All of my tribe came to TALGV after my mom went into a nursing home (even for those places that allow a pets, that was a bit over the top!). Being a super outgoing guy, I was adopted right away, but the lady said I was “too affectionate and needed to be around her all the time,” so she brought me back after only a week (the volunteers were pretty astonished at that, I can tell you)! So — if you WANT a guy who will be with you through thick and thin — I’m the one. I’m a young tabby and white boy who’s yearning for the chance to shower you with love!