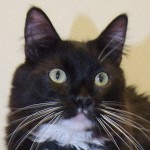 Hi… my name is Vince.

Sometimes the best of intentions go awry. My folks had hearts of gold and, like lots of people, just couldn’t say “no” when a stray cat arrived in their yard. After they’d accumulated 20 of us (none neutered!), they realized that they needed help finding us safe homes, so TALGV’s Outreach Program came to the rescue. My mom said, “Vince is lovable and likes to cuddle and sleep next to or in your lap. He’s sometimes a bit rough when playing with fingers, but is a real charmer. He gets along with other cats, but has never been around dogs. He knows his name, ‘down,’ and is squirt bottle trained.” Well, between me and thee, I’m not crazy about that squirt bottle thing, but maybe we can work something out! Let’s try!

PS If ANY cat considers you for adoption, you know you’re pretty lucky, but if one of our few FIV cats picks you, you can be sure you’re REALLY special!

NOTE: FIV is a virus that can only be passed among cats (humans or dogs are never affected), and only through blood. Since cats rarely fight to the degree of drawing blood, FIV positive cats can live long and healthy lives with both other FIV positive cats and friendly non-FIV cats. So don’t let those letters scare you — they’re practically like everyone else and they’ll love you even more for choosing them!