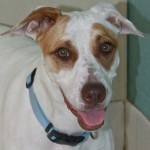 Hi… my name is Pearl,

I’m a happy, enthusiastic girl despite losing my first home through no fault of my own.   My person wanted to keep me, but the landlord wouldn’t allow it. She still really wanted me, so I was kind of “on hold” for a while, but eventually it became clear that I must have a new place to live. So, here I am, putting on my best smile and looking forward to a happy future. I’m what people call “optimistic.” I’m also pretty smart, according to the volunteers, so with some human help, I could become a well-trained companion. I’m a 40 pounds female Pointer mix,  white with some cool tan markings (especially around my eyes). Please come for a visit and I’ll show you what a fun-loving friend I can be.