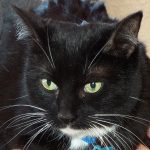 Hi… my name is Big Kitty,

Maybe someone was being cute when they named me Big Kitty (I’m 10 pounds) and my housemate, Little Kitty (she’s 14 pounds!), but I’ve learned that humans have a weird sense of humor sometimes! After my mom became ill, her friend cared for me for a while, but she had health issues too, so TALGV got to be my temporary home (and nice as it is, I hope it won’t be for too long!). I’m a shy, quiet 6½-year-old lady who has a rather unusual trait – I much prefer to use a human toilet to my litterbox, so for those of you who’d rather not have to deal with cleaning them, I’d be the ideal housemate (but you should probably have one anyway, just in case!).