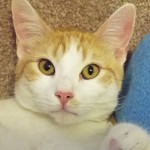 Hi… my name is Duncan,

There aren’t tons of people willing to care for feral cats, but the wonderful lady who rescued my siblings and me has been doing that for years. I think the word got out to the feline moms in her neighborhood, as they often brought her their litters, knowing that she’d see that they were safe, and so it was with me. I went to live with a big, active family for a few months, and although they said that I was lovable, gentle, and playful, their other cat often intimidated me, so sometimes my manners took a bit of a tumble. I’d like to prove that I really can be a perfectly behaved little guy, and I’ll bet in a more calm home where it’s just you and me, I’ll be just that!