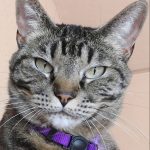 Hi… my name is Ranger.

I was found near Titan Storage right near TALGV, and when I first arrived, they thought I was a boy (hence my rather masculine name). Then when they discovered that I was a lady, they thought I might be pregnant, but it turned out that I wasn’t either of those things, so after being spayed, I’m ready to go on about my life without having to worry about raising any more babies (after they examined me, it was apparent that I had already had a litter or two). It appeared that I’d been on my own for a quite a while, so I was a bit undernourished, but that’s been taken care of with lots of good food and extra nutrition. I am a sweet, young, archetypical, black/brown, striped tabby girl and I am super outgoing, affectionate, and I know I’d be a beguilingly curious companion. Why don’t you take me home and find out?