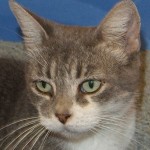 Hi… my name is Waffles.

When you’re unceremoniously deposited on a doorstep with your newborn kittens, it’s pretty scary I’ll tell you! OK — better to be left there than in the desert, but still… Fortunately, TALGV has some wonderful volunteers who are willing to foster infant kittens (with or without their moms), so I went with one of them until my babies (Yogurt, Oatmeal, and Bagel, the “Breakfast Litter”) were old enough to be adopted. And now it’s MY turn to be in the spotlight instead of those oh-so-adorable (and rambunctious) kids of mine! I’m a sweet, love-everyone young jade-eyed tabby and white teenager, and since I’m no longer in the kitten production business, I can devote all my time and affection to just you! Doesn’t that sound like a plan?