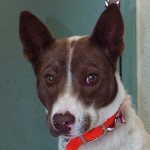 Hi… my name is Carla,

When I arrived at TALGV, someone started singing, “Hey there lonely girl…” They saw that I’d been lost, lonely, very scared, and in need of a friend. Weeks later, I was thrilled to be adopted. But then my owner began traveling extensively and I was returned to TALGV, where my friends welcomed me back. They’re ready to help me find a new home, hoping this time it’s the forever kind! I’m an active, playful female who enjoys car rides, toys, and quiet times, too—your gentle touch means so much. I’m young and slender, about 17 months and 40 pounds, white with brown markings, resembling a Canaan Dog and probably a Pointer mix. Best of all, I’ll be a devoted companion to the person I can love and trust, and I’m hoping that’s you.