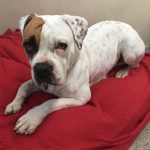 Hi… my name is Dulce,

You know how they say that looks can be deceiving? Well, I am a strong, muscular bulldog and boxer mix girl who may look like a prize fighter but is actually more like a gentle giant and even a bit shy. That is why they named me Dulce, which is Spanish for sweet. Just look at my soulful eyes, and you’ll understand! I like car rides and going places, and I do like to run some times. I get along pretty well with other dogs, too. They say I walk nicely on a leash and don’t pull, and that I’m a sucker for ear scratches and belly rubs. I’m really just a couch potato whose favorite place is next to her favorite someone. Now I just have to find that special someone. Is that you?