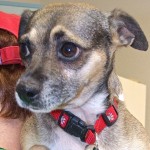 Hi… my name is Georgie.

Eight dogs, two cats, one rabbit (and several humans of course!). That’s the number of critters I lived with after I was found on the Fourth of July! The people who discovered me near Mann and Sahuarita Roads thought that maybe I’d been frightened by the Fourth festivities, so they looked for my owners for three weeks before bringing me to TALGV (I guess they can’t be faulted for not keeping me given the menagerie they already had!). I’m a captivating sable, fawn, and white Chihuahua mix boy  with the most winsome “won’t you take me home?” expression you’ve ever seen. Why not help me change that to “goody, now I’ve got a place of my own”? I’ll bet we’ll both be happier for it!