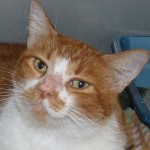 Hi… my name is Caramel,

Since my rescuers had two dogs and a bird and were allergic to cats, it was really grand of them to have kept me for two weeks anyway! But they said that during that time I was very lovable with both adults and kids, so that may have made it a smidge easier! It’s obvious that I’ve been someone’s friend once, since I’m an outgoing guy who loves being “messed with,” and it’s also evident that I’d run into a cactus or something pretty scratchy, as my nose had sores and scratches all over it, but happily they’re healing well now. Practically any cat with orange tabby in it is likely to be “outgoing,” and I’m no exception, so why don’t you make sure that I’m “going out” with you!