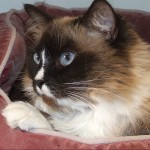 Hi… my name is Mello,

Everyone’s trying to decide which I am – a Snowshoe or a Ragdoll – but in either case, you can bet I live up to the captivating traits of both (which are pretty similar actually!). I love people, have lived with two dogs, and until recently when the older one started to dominate and intimidate me, got along fine with them. My mom said, “Mello is a warm, loving lady who enjoys being brushed and will sit in your lap and watch TV for hours.” (She also said that I’d love to sleep in bed with you if allowed – which I wasn’t – I think that honor “went to the dogs”!) At any rate, my name says it all, so if you give me a chance, I’ll fill your house with affection – one purr at a time!