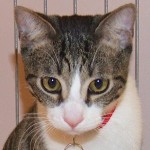 Hi… my name is Remy,

Rats! Here I thought I’d found the home of my dreams when a family adopted my sidekick, Flopsy, and me as kittens a few months ago. Well, life really was grand with a little kid and dogs to play with, but then they decided they wanted another dog, and the one they got was humongous! It’s not that he intimidated us, but he was so big, and, uh, seriously exuberant, that they were afraid he’d hurt us, so for our safety, back we came. But just as we were as babies, we’re sweetness personified, and still do all the wonderful kitten things that will, as country music song goes, “steal your heart and squash that sucker flat!” TALGV wants us to stay together, so won’t you let us both croon our way into your heart?