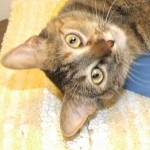 Hi… my name is Nevada.

When I first arrived at TALGV I was just a few weeks old, and was named “Glitter,” and although my dad changed my name, that moniker still applies as I have one glittering personality! Unfortunately, his job has now necessitated a whole ton of travel for him, and that left me with sitters an awful lot, so he felt that I deserved to have a person around to spend my time charming. I also had an 11-year-old child that was “mine,” but she had a few allergies, so those two things conspired to end my sojourn with them. I’m a lovely 18-month Torbie girl (that’s a torti and tabby mix), who loves to play and schmooze, so why not let me be your entertainment for the summer?