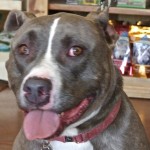 Hi… my name is Frankie.

“Frankie is a super sweet boy who will lick you to death if you let him.” Nice intro, huh? I’m a Staffie mix who was adopted by my family a year ago and got along fine with their other dog until I decided I wanted ALL the attention, so that didn’t work out well for me! Here’s some of what my people said: “Frankie loves going out to the desert and being outside in general. He does very well with kids (ours are 18 months and 3) and is protective of them when we are outside. He should be the only pet in an active home, especially one with an outdoorsy male figure. He needs to be inside with people whenever possible, not left outside to his own devices because he gets bored and it hurts his feelings.” Oh, there’s lots more good stuff, so come for a “meet and greet” and see for yourself!