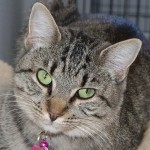 Hi… my name is Gypsy.

When I arrived at TALGV in 2014, I was dirty and practically starving, but a total sweetheart. After I got spiffed up, I went to live with a senior gentleman and lived with him for several months, but he said I was “too active” and caused him a lot of frustration (OK — I can be a “door darter”!), but that I really was a friendly gal who loves to play with “anything on a string” and small toys. I also was outgoing and eager to greet everyone who visited (thus the open door thing!), but really, if I have lots of stuff to keep me occupied, and a house to roam in, then I think I’d be one happy camper. I’m a lovely green-eyed, grey tabby girl who just wants to be your “meeter and greeter”!