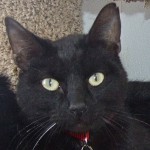 Hi… my name is Whiskers.

When my mom returned me after five months, she said, “He’s an incredible boy and this was a terribly hard decision.” The family had to move to a new home and could only have one pet, so their older, established cat understandably won out. Well, mom had lots of good things to say about me, so here’s a sampling: “Whiskers is energetic and adventurous and incredibly intelligent. He’s vocal, with adorable high trills, playful, and has an affinity for shredding paper. He’s very affectionate, and while not a lap cat, will curl up beside you and adapts well to new environments and people. He’s basically a marvelous cat – beautiful, loving, and bright – and deserves a home where he’ll get the attention and space he needs.” So there – what more could you possibly want?