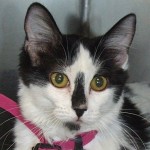 Hi… my name is Rosemary,

Not too long after I was adopted as a baby last year, the family discovered that their 2½-year-old was allergic to me, so unfortunately I had to spend my time isolated in one room away from him. Happily for me, after four months, they decided that I needed a home where I had the freedom to do all the engaging kitten things I was designed for and to participate more in the daily goings on in the house. I am a petite, totally sweet medium-haired black and white youngster who’s playful, loves attention (whenever I can get it – I need lots!), and, according to them, am a “great girl who deserves more freedom and interaction with a family.” I’ll bet my bottom dollar yours would fit the bill!